New Tsinghua Xuetang: Built to commemorate Tsinghua’scentennial anniversary, the New Tsinghua Xuetang is a grand architectural masterpiece. It is equipped with two side stages and an orchestra pit. The auditorium has three floors that can accommodate 2,011 audience.

Tsinghua’s Student Activity Center (Mong Man Wai Building): Tsinghua’s Student Activity Center (Mong Man Wai Building)is donated and constructed by Hong Kong-based Shun Hing Group and named after Mong Man Wai, an alumnus of Tsinghua University from 1946 to 1948. This building covers 2483 square meters, with a construction area of 4071 square meters, and is mainly used by students for their cultural activities. Construction for this building began in 1993 and completed in 1995, and was renovated in 2015-2016 to accommodate activities with up to 300 people at the same time. 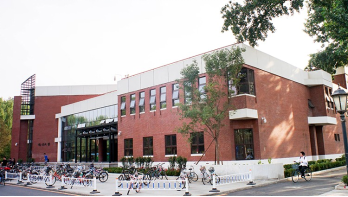